This tutorial teaches FIWARE users how to architect and design a system based on linked data and to alter linked data context programmatically. The tutorial extends the knowledge gained from the equivalent NGSI-v2 tutorial and enables a user understand how to write code in an NGSI-LD capable Node.js Express application in order to retrieve and alter context data. This removes the need to use the command-line to invoke cUrl commands.

The tutorial is mainly concerned with discussing code written in Node.js, however some of the results can be checked by making cUrl commands.

The docker-compose files for this tutorial can be found on GitHub:

― This Is the House That Jack Built, Traditional English Nursery Rhyme

NSGI-LD is an evolution of NGSI-v2, so it should not be surprising that Smart solutions based on NSGI-LD will need to cover the same basic scenarios as outlined in the previous NGSI-v2 tutorial on programatic data access.

NGSI-LD Linked data formalizes the structure of context entities to a greater degree, through restricting data attributes to be defined as either Property attributes or Relationship attributes only. This means that it is possible to traverse the context data graph with greater certainty when moving from one Relationship to another. All the context data entities within the system are defined by JSON-LD data models, which are formally defined by referencing a context file, and this programatic definition should guarantee that the associated linked entity exists.

Three basic data access scenarios for the supermaket are defined below:

Further advanced scenarios will be covered in later tutorials

The supermarket data created in the previous tutorial will be loaded into the context broker. The existing relationships between the entities are defined as shown below: 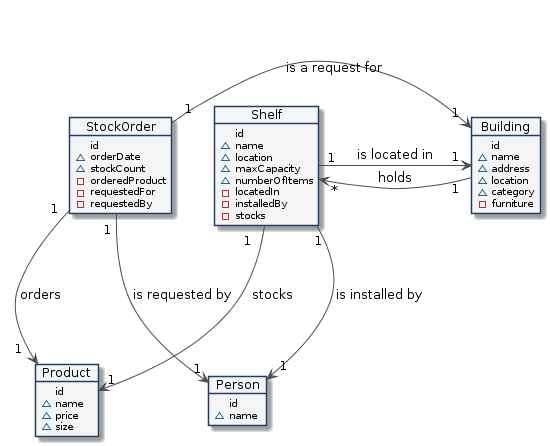 The Building, Product, Shelf and StockOrder entities will be used to display data on the frontend of our demo application.

The teaching goal of this tutorial

The aim of this tutorial is to improve developer understanding of programmatic access of context data through defining and discussing a series of generic code examples covering common data access scenarios. For this purpose a simple Node.js Express application will be created.

The intention here is not to teach users how to write an application in Express - indeed any language could have been chosen. It is merely to show how any sample programming language could be used alter the context to achieve the business logic goals.

All the code Node.js Express for the demo can be found within the ngsi-ld folder within the GitHub repository. Stock Management example. The application runs on the following URLs:

:information_source: Tip Additionally, you can also watch the status of recent requests yourself by following the container logs or viewing information on localhost:3000/app/monitor on a web browser. 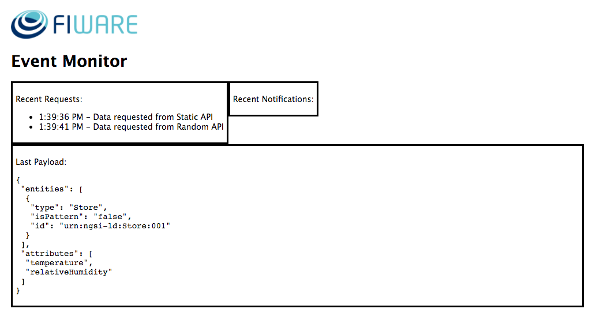 To keep things simple all components will be run using Docker. Docker is a container technology which allows to different components isolated into their respective environments.

Docker Compose is a tool for defining and running multi-container Docker applications. A YAML file is used configure the required services for the application. This means all container services can be brought up in a single command. Docker Compose is installed by default as part of Docker for Windows and Docker for Mac, however Linux users will need to follow the instructions found here

We will start up our services using a simple bash script. Windows users should download cygwin to provide a command-line functionality similar to a Linux distribution on Windows.

The demo Supermarket application will send and receive NGSI-LD calls to a compliant context broker. Since the NGSI-LD interface is available on an experimental version of the Orion Context Broker, the demo application will only make use of one FIWARE component.

Currently, the Orion Context Broker relies on open source MongoDB technology to keep persistence of the context data it holds. To request context data from external sources, a simple Context Provider NGSI proxy has also been added. To visualize and interact with the Context we will add a simple Express application

Therefore, the architecture will consist of three elements:

Since all interactions between the elements are initiated by HTTP requests, the entities can be containerized and run from exposed ports. 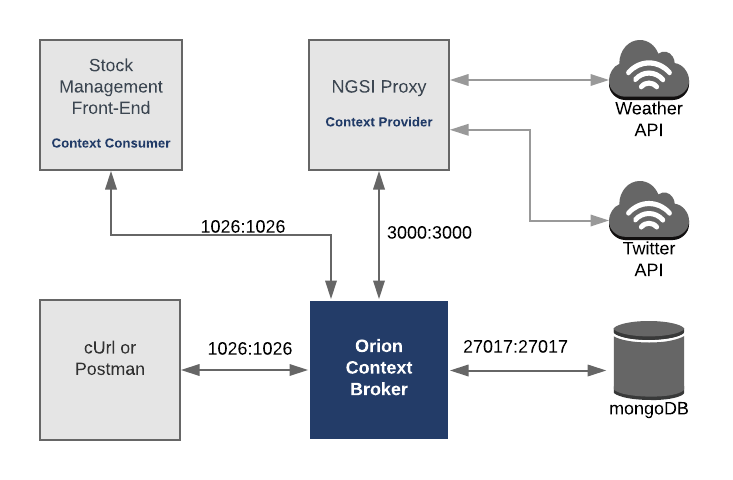 The necessary configuration information for the Context Provider NGSI proxy can be seen in the services section the of the associated docker-compose.yml file:

The tutorial container is driven by environment variables as shown:

The other tutorial container configuration values described in the YAML file are not used in this section of the tutorial.

Note: If you want to clean up and start over again you can do so with the following command: